The Foundation Mourns the Loss of John E. “Jack” Steger 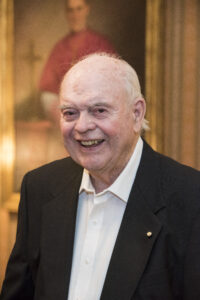 Jack Steger, the Bethlehem University Foundation’s first Board of Directors chairman, passed away on July 14 at the age of 95. Jack was an early and passionate backer of the Foundation, and brought his infectious enthusiasm to every conversation, board meeting and initiative he was part of.

Born in St. Louis in 1926, Jack joined the Navy in 1943, and attended V-12 training and Midshipmen’s School, finishing just in time to join in the celebration of V-J Day. He went to sea in 1946 as a Naval supply officer serving post-World War II duty in the Pacific.

After his discharge, Jack wed his college sweetheart, Maria Walkowiak, and together they relocated to St. Paul, Minnesota. There, Jack joined his father’s insurance company, where he began a long and distinguished career in insurance and wealth management. After Maria’s death in 1977, he married fellow St. Pius X parishioner Nan Scott in 1979, blending her four children with his four. Together, the couple traveled to every continent, continuing their adventures until just a few years ago.

While Jack was involved in a variety of Catholic organizations and charities, it was at the Bethlehem University Foundation where he may have found his true calling. He played a pivotal role in the early history of the Foundation, helping to establish much of the organizational infrastructure that still exists today, including its governance and bylaws, as well as its investment, finance and audit committees.

Jack shared his sense of joy and community among his fellow board members, arranging social events prior to board meetings and encouraging open discussion among its members. “Jack was innately joyful and interested in other people,” recalls Sister Irene O’Neill, CSJ, Ed.D., who succeeded Jack as Board Chair. “He was engaging, smart and strategic, and brought out the best in other people. He just made you want to roll up your sleeves and pitch in.”

Services will take place on Wednesday, August 4th, at St. Pius X Catholic Church in White Bear Lake, Minnesota. Visitation begins at 9:30 a.m., with Mass of Christian Burial at 11:00 a.m., and interment at St. Mary of the Lake Cemetery.